First things first, I really can’t take much credit for this photo. Sure I lit it and pressed the button, but it was 100% a team effort. Colleen Anne is a talented hair stylist who helped create the look, and Breanna Gittell is a fantastic model. With this much talent working together it’s hard to take a bad picture.

Lesson Learned: Surround yourself with talented people. Your photos will be better because of it.

We did the shoot in a giant concrete tunnel. Because, you know, everyone has a few of these within walking distance of their house, right? The picture here gives you an idea of the scale of this thing –probably 18 feet in diameter. I placed Breanna near the mouth of the tunnel and took the first test shot below. Just as I expected the background quickly faded to blackness, which is exactly what I wanted. This meant that unless I purposely threw some light on it, it would remain black. In other words I had control over my environment, kinda like a studio, only much longer and with a really cool echo sound.

I kept the lighting quite simple. I placed my AlienBee strobe about 40 feet behind Breanna and pointed it straight at her. This illuminated the tunnel and provided a tiny bit of rim light on her hair and coat as seen in the second test shot. 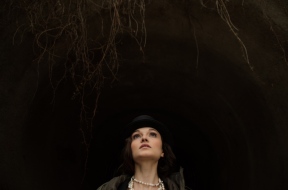 Now all that was left to do was to light Breanna. I purposely positioned her near the mouth of the tunnel because I wanted some of the soft, natural light to hit her. It was a cloudy, cold, and rainy day; so I didn’t have to worry about direct sunlight or harsh shadows. All I wanted was a little splash of light to give a sense of mood and a nice catchlight in her eyes. I diffused an SB-900 speedlight with a 36″ shoot-through umbrella and told my assistant to hold it high and to my right.

That’s it. Just two lights. …and a model. …and a hair stylist. …and a makeup artist. …in a really big tunnel. …on a rainy day.

Like I said, all I did was light it and shoot it.

2 thoughts on “Behind the Lens: The Making of a Photograph”